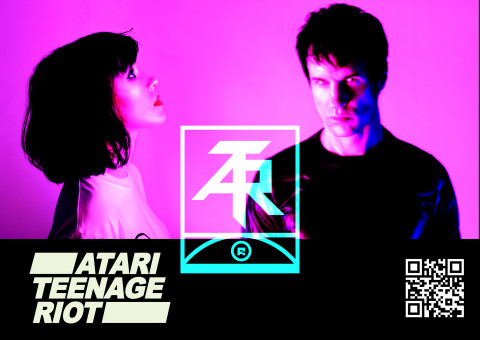 Einlass: 20:00 Beginn: 21:00 Tickets: https://bit.ly/2GqBvua Atari Teenage Riot are the glitch in the system. They speak out against conformity, fascist tendencies when they arise in modern society, and they address often uncomfortable truths in their lyrics. These "uncomfortable truths" led the German authorities to put the ATR album “The Future Of War” on the “index” in 2003, labelling it as a threat to society, blacklisting it. It was illegal to sell or play this album in public. Why? Because ATR described a Germany that the establishment wanted to hide: the growing militant far-right; the underlying racism; and secret arms deals with oppressive regimes. While the international music press celebrated Atari Teenage Riot as a true authentic voice from Berlin, Germany’s authorities tried to shut them down. When the popularity of the far-right party AfD expanded during the last elections in Germany, many of Atari Teenage Riot’s critics understood that this development in Europe was something that ATR had warned about the whole time. Alec Empire says:”I think it is a must for all artists to educate their audiences about these problems - A boxer wouldn’t simply go into a match unprepared, wouldn’t start training on the day of the fight. We as creatives have to look at reality every day or we lose the ground under our feet. It's also bad for the music itself, if you lock yourself up in an ivory tower and ignore what is happening. Especially many young people don’t have the tools to understand and analyze what gets thrown at them on social media. They react emotionally and don't know how to control their anger, don’t know how to channel it into something positive. Music can help people to self-determination. It can be far more than just entertainment. It can really make you think.”