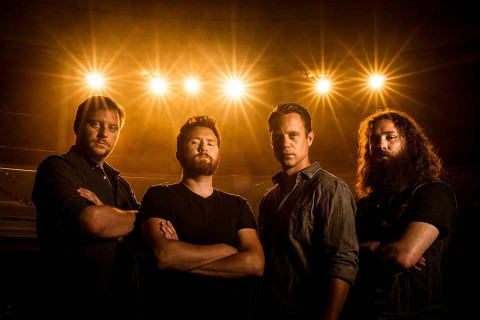 Einlass: 20:00 Uhr Beginn: 21:00 Uhr Support: tba Tickets: https://bit.ly/2tlHgA3 VVK im Café Marat: 08,00 Euro Info: “Offering clever dynamics and evincing broader emotions to elevate Deville above the mediocre Orange Cabinet-abusing masses out there.” Blabbermouth When it all came together in 2004 Deville was born after some years of searching. Through a haze of rock, metal and stoner the members have found a way to do something that feels… The line-up was complete when Åkesson came back from Australia and Hambitzer gave up soulless pop and joined the duo, Andy and Markus. Since the 2004 line-up there have been nearly 400 gigs and festivals in all over Europe and in the U.S and joined bands on tours like R ed Fang, Torche, Mustasch and Truckfighters among other great acts. It all started when Daredevil Records released a double feature cd lp with Deville at the end of 2005.Deville later signed to Buzzville Records in 2007 and the first full length album with material recorded during the period -06 and -07 “Come Heavy Sleep” was released in Europe and the US in the beginning of 2008. “Hail the Black Sky” followed in june 2009 again through Buzzville in Europe and in the US and the touring in Europe continued. During 2011 and 2012 the album “Hydra” was created and Jan Persson joined the forces on guitar when Martin left after recording the album.This new album was the most intense and elborate so far and received great reviews. In march 2013 “Hydra” was released on Small Stone Records. During the summer Andreas Wulkan (Death Ray Boot etc.) replaced Janne on lead guitar. Touring continued through 2013 and 2014 in the US and Europe. The work on a new record began and the album “Make It Belong To Us” was recorded summer 2015 again at Sunnanå Studios and produced and mixed by drummer Markus Nilsson. It became a more progressive and metal influenced record but still with the significant hooks and melodies that the band is known for.Released in November 2015 on swedish label Fuzzorama Records. In 2016 Markus Nilsson and Markus Åkesson decided to leave the band and the new lineup, announced in august, was complete with Martin Nobel on bass, known from bands as Bad Barber, and Martin Fässberg on drums, known from Quit your dayjob, Suma a.o. In October 2018 the new release “Pigs With Gods” saw the daylight and is the fifth full length album. It picks up where “Make it belong to us” left off moving in an even more heavy direction straight in direction of metal, leaving the stoner genre behind in favor of a more classic metal sound. Whilst still being a record containing alot of dynamics ‘Pigs With Gods’ is definitely the bands heaviest effort to date. Band quote : “When we first started writing music for a new album it became evident to all of us that we were quite tired of the traditional doom/stoner genre… It soon became clear that more Metal was what we all wanted! Thus the album was given a very metal feeling…”