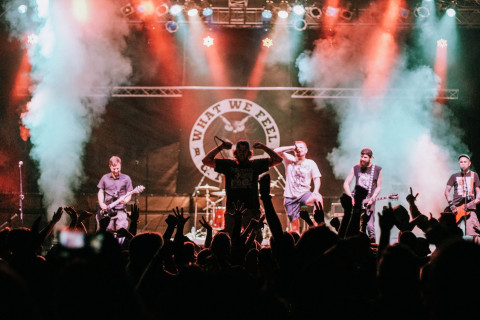 What We Feel Autumn 2019 07.11.2019 Einlass: 20 Uhr Beginn: 21 Uhr Support: \ Tickets zzgl. Gebühren tba Die Band über sich: Having appeared on the scene in 2005, W.W.F. have come a long way – from the underground gigs in front of a small group of friends, to major European festivals. Not trying to copy popular Western bands and follow trends and clichés, What We Feel from the beginning started playing tough and angry music with straight lyrics telling about the most pressing scene and society problems. No wonder that the band’s style is often referred to as jokey “tough guy hardcore”: What We Feel speak with the audience in a clear language about simple but at the same time eternal things: friendship, responsibility, loyalty to the word, mutual help, the need to stand till death for the loved ones and the beliefs. And the band never gets tired of showing by their own example that the ethics of punk and hardcore, their ideals and principles are not outdated subcultural clichés, but a guide to action for those who want to make the world a better place. Sincerity and dedication, as well as topicality of the band’s songs haven’t gone unnoticed – in the second half of the 2000’s W.W.F. unexpectedly for many people acquired the cult status, becoming a true voice of the local independent punk and hardcore scene; the band rallied the support of representatives of various streams of the local underground, laying the vector of its further development. Personal threats, cancellations of concerts, frustrations, and loss of close friends – in nine years, the band have gone through a lot, and not a single step back was taken: they stick to their beliefs and they have proven their reputation not in word but indeed. The map of What We Feel live shows for the past 9 years includes concerts from Manchester to Murmansk, from Marseille to Vladivostok. In Europe the collective is the icon of the Russian politicized hardcore for a long time. Borders of W.W.F. touring are expanding each year – at the moment What We Feel have visited 18 countries of Europe and Asia and have played the total of more than 300 shows. They performed as headliners at such major festivals as MayDay (Berlin, Germany), Resist to Exist (Berlin, Germany), HafenRock (Hamburg, Germany) and many others. The band’s recordings, including the earliest ones, were released, and are successfully distributed on the European music market by well-known German labels Mad Butcher Records, Fire and Flames Records and Audiolith Records. In February 2018 band will release new LP, as split with Belorussian oi band Mister X. The social activity of What We Feel attracts the attention of local and foreign media. Musicians have been interviewed by the paper press, TV, Internet resources, starred in documentaries “Ivan. In Memory of our Friend” (Russia), “Key for Clockwork Orange” (Russia) and “Noise and Resistance” (Germany). The band members are considering their relative popularity only as a tool to convey their views to the widest possible audience: each tour of What We Feel is accompanied by screening films about the life of the independent scene in Russia, public discussions dedicated to the main social problems. From the first days of activity What We Feel have regularly support various charity initiatives, participating in benefit concerts and tours.